What is a Sandbagger?

A sandbagger is a player who intentionally lowers their rating by losing on purpose, often with the intent of entering tournaments that they can easily win.

If one player has completely dominated a tournament, and seems to be playing way above their rating, take a look at their game history to see if it looks suspicious.

Hover over the user’s name, and click on the ‘archive’ icon (sometimes you may have to click on a ‘more’ option first to see this icon) 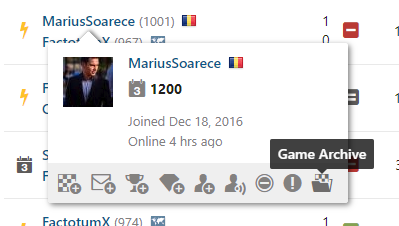 This option will take you to the player’s recent games.

Sandbaggers will often resign many games in a row after just a few moves, lowering their rating by a large amount. Sometimes these players will give away their queen before resigning, to make it look like they resigned due to a blunder or misclick.

If a player has a long string of losses right before they entered a tournament or a club match, they might be a sandbagger.

Sandbaggers don't always sandbag to enter tournaments! Sandbagging is against the rules whether they are going into a tournament or not. Some sandbaggers just want to win some easy games, and will lower their rating to play lower rated players in auto-match. This is still against the rules!

If you have played against someone who seemed way stronger than their rating, and you look in their game history and see a long string of losses in just a few moves before they played you, then that could be sandbagging!

If you suspect someone of being a sandbagger, please report them! The support team will look further into it.