What is the details tab in Analysis?

The details tab in the game analysis shows not only the details of who won, how they won, and the date the game was played, but it also shows a lot of statistics about the moves made in the game.

To see the details, click on the ‘i’ icon:

Below the basic game information, you’ll see a few other sections.

Performance:  This shows the accuracy for each player, the best move percentage, the average difference between the players move and the best move, and the total number of moves.

Performance by Piece: This shows the accuracy of each move broken down by the piece moved. For example, in the image below we see that white had less than 5 accuracy with pawn moves, but nearly 95 accuracy with knight moves. 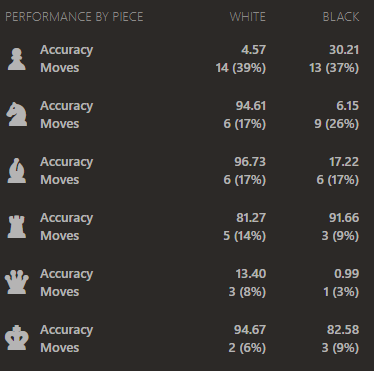 Opening: This section details the moves made in the opening. It tells what opening was played, how many book moves, and the score when the players left the book.

Middle and Endgame: These sections detail the moves made in the middle and end game. They tell the number of inaccuracies, mistakes and blunders, and missed wins. 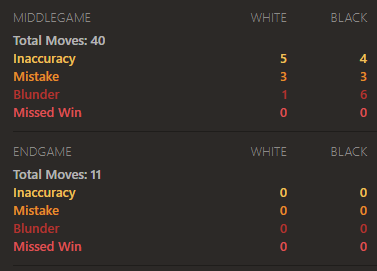 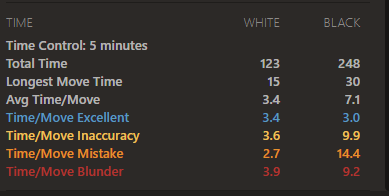 Did this answer your question? Thanks for the feedback There was a problem submitting your feedback. Please try again later.
Last updated on January 8, 2021