Checkmate with a pinned piece? What's going on?

Take a look at the below position. At first, it might seem like the white king can capture the queen because the black rook is pinned by the bishop. But actually, this is checkmate! What is going on here? 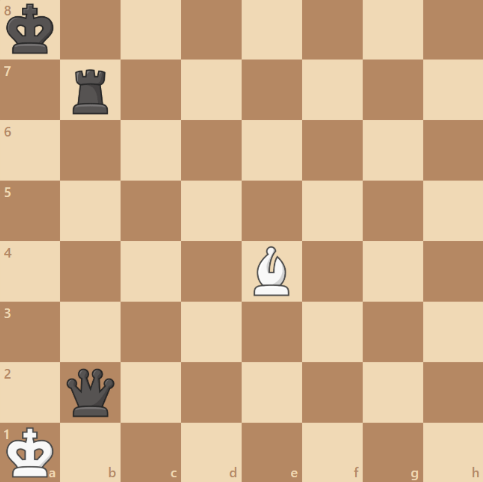 Since the rook is pinned (if the rook moves, the black king will be in check from the bishop) why can’t the white king capture the queen?

Here’s another way to think of it. A game of chess is over when there’s a checkmate, but what is checkmate? Checkmate is when no matter what piece a player moves, their king will be captured on the next move. In chess, we don’t go through the motions of actually capturing the king. When we see that it’s inevitable the game is declared over.

Let’s pretend though, that we DO get to capture the king, and when a king is captured the game is over. Now what happens? Let’s see…

The white king captures the queen… then the rook moves down and captures the white king! Game over! It doesn’t matter that the black king has been exposed to the bishop, because after capturing the king the game is over. White doesn’t get another turn to move the bishop.

In real chess we end the game one move early. If we see that the king is going to be captured on the next turn, then the game is over.

Another way to think of it is: You can’t make a move that would allow your king to be captured on the next move.