If you start a game by mistake, or suddenly realize you won't have time to play, you can cancel the game by clicking the 'abort' button: 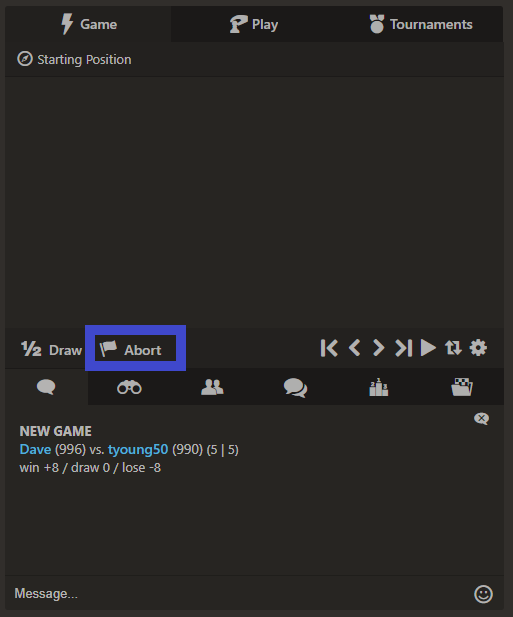 This button is beneath the moves list, where the Resign button usually is. On Android or iOS mobile the abort option is in the options menu. The Abort button is only available before your move has been made. After you move, the option changes to Resign.

When you Abort a game the game is canceled. Aborted games do not show as a win or loss for either player, and will not show as a game in your game history.

I don't see the abort option, what's going on?

The abort feature is meant to be used sparingly, only in circumstances where you know you won't be able to finish the game. Players who abuse the abort feature by using it too often will have the option removed.

If you find that your ability to abort has been removed, you must simply keep playing games. Once you have played a number of games without aborting, the option will return.

My opponent aborted in the middle of the game! How can this happen?

In some rare instances you  may find that your game is aborted well past the start of the game, and you can find no evidence of the game ever happening. There are two reasons this can happen:

1. You were playing an Arena game, and the Arena ended. When an Arena ends (the time for the Arena runs out) any ongoing games are aborted. Since these games will not have been completed during the Arena, they can not count toward the Arena points, and must be canceled.