What computer am I playing against?

If you've played against the computer on Chess.com web or on the app, you may have wondered what this computer actually is. Well, the answer depends on where you are playing!

On the web: the computer is powered by Stockfish10!

On Mobile: the computer is powered by Komodo!

However, if you are playing against a ranked bot in Live Chess, you will know whether it is powered by Stockfish or Komodo by the name of the bot: 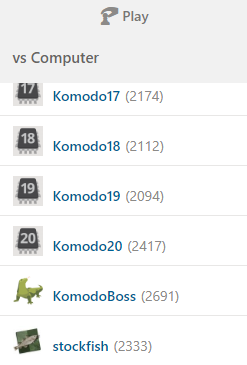 Or, if the bot has a human name (such as Elena-bot or Juan-bot) these are powered by Komodo!