PGN (Portable Game Notation) is an easy-to-read format which records both the moves of the game (in standard algebraic notation) and any related data such as the names of the players, the winner/loser, and even the date the game was played.

Here is an example taken directly from the chess.com archives:


If you were to copy this entire block of PGN and post it as a Game or Sequence of Moves diagram in a forum post, then you'd be able add commentary before/after any moves in the sequence. Anyone reading that post would be able to play through the game using the arrows at the bottom as well as see any comments you made in the editor. Also, all the information about who played it, when, where, etc., would be displayed at the top of the diagram.

Of course, you don't NEED all the extra information. Copying just the moves (1.e4 through 16.exd3) will suffice. But then you wouldn't have any player/game information unless you manually entered it in the "Game Details" tab of the editor.

In order to get a PGN from a game, simply click on the download button underneath the move buttons on any chess game, ongoing or complete: 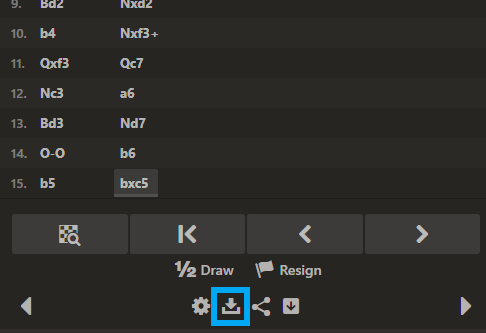 FEN (Forsyth-Edwards Notation) provides all the information needed to describe ONE particular position. It won't tell you much about what occurred before that point in the game; for instance, it cannot indicate if a draw by threefold repetition might occur.  However, it does show if there are possibilities for castling, whose move it is, and the number of moves played so far.

If you REALLY want to become good at reading FEN, read this article.

Here is what an FEN string looks like for the initial setup of the board:

And here is what it looks like at the final position in the PGN string I provided above:

FEN strings are good if you want to simply show a single position, or if you want to post a puzzle. In that case, you just paste the FEN into the chess.com Diagram Editor, enter the solution moves and insert. It is much simpler than setting up each piece individually.

In order to get an FEN from a game, simply click on the "Moves" tab on the menu beside any chess game and then click once inside the little white box that says "FEN." Copy and paste it as needed.

If you have questions about using the PGN or FEN with the Analysis Board and Editor, check out this article.

Likewise, if you wish to learn more about using PGN or FEN with the puzzle/position diagrams in the forums, click here for more information.

Did this answer your question? Thanks for the feedback There was a problem submitting your feedback. Please try again later.
Last updated on January 11, 2021