How do I join the Beta? (Android)

If you want to see the new features, updates, and bug fixes before anyone else, try joining the Beta!

See below for how to join the Android Beta. If you want to join the Beta for the website, see here.

Then, scroll down to the very bottom, past the reviews, and below the developer contact: 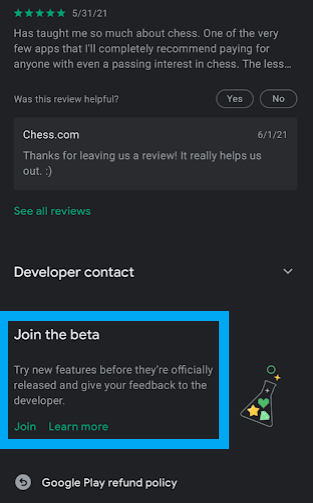 Tap on 'Join' and you will be asked if you are sure:

Tap 'Join' again, and you'll see that you are now being added to the Beta!

After about 5 minutes, an update will install, and you will then be on the beta version of the Android app.

If you ever decide you want to leave the Beta, you can always return to this same screen and tap 'Leave'

After tapping 'Leave' it will take about 5 minutes, then you will be removed from the beta. You can then uninstall the app, and reinstall the normal version.

Did this answer your question? Thanks for the feedback There was a problem submitting your feedback. Please try again later.
Last updated on June 3, 2021