How do ties in tournaments work?

Tournaments created on Chess.com will by default have a tie break system enabled (we use the Neustadtl score method) which factors in the strength of the opponents. If you don’t want to use tie breaks in your tournament, you can disable it in the advanced options when creating your tournament.

If you do disable tie breaks, both tied players will advance to the next round. See here for more info on creating tournaments.

Here are what tie break points look like in a Live tournament: 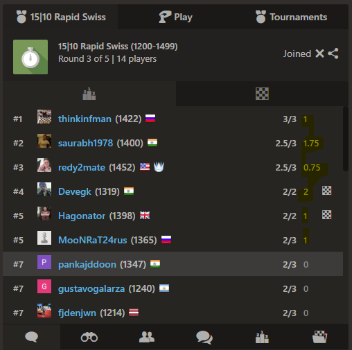 Below is an example of a group in a daily tournament where the Tie-Break method is used. You can see the top two players have the same score: 8.5. The Tie Break method factors in the Tie Break points, which are based on the score of players they have defeated and drawn against. 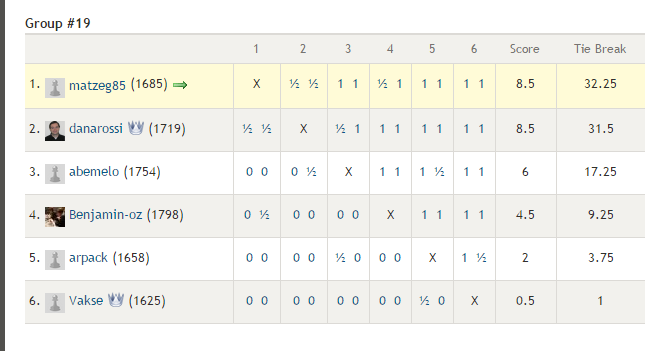 If two players have the same score and the same Tie Break score, both will advance.

Here is an example from the same tournament; both players 1 and 2 had the same score and the same Tie Break; both advanced to the next round:

Below is a simplified example of how the tie breaking system works:

John won one game and drew one game against Mary. So John gets 1.5x1.5 points from Mary, which sums up to 2.25 tie break points.

Did this answer your question? Thanks for the feedback There was a problem submitting your feedback. Please try again later.
Last updated on April 6, 2022