What are timeouts? Why can't I play in tournaments because of them?

You may have noticed a ‘timeouts’ percentage on your stats page, and seen that some tournaments prevent players with a high timeout percentage from joining. What does all this mean? 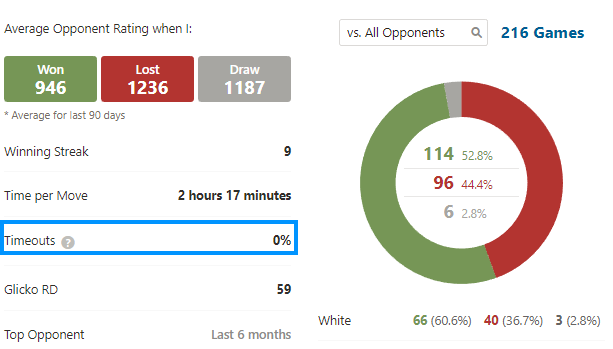 The default setting for tournaments prevents members who have timed out in more than 10% of their Daily games over the last 90 days from joining. Tournament directors don’t like having players who are likely to abandon games in their tournaments, so you will see that many tournaments on chess.com have this restriction.

If you have too high a timeout percentage and want to lower it, you only have to complete more games! This will eventually lower your average. Alternatively, since the percentage is only measured over the past 90 days, if you wait long enough the percentage will go away on its own.

Did this answer your question? Thanks for the feedback There was a problem submitting your feedback. Please try again later.
Last updated on May 12, 2021