What is the Players League? How do I join?

If you are playing Chess on Chess.com, you are in the Players League! Everyone is automatically entered into a division, in groups of 50, after you play your first game of the week. Based on how much chess you play during the week, you may be able to advance to the next level.

How does it work?

Everyone starts in the Wood league. When you play your first game of the week, you will be entered into a league group with 49 other people who also played a game recently. From then on, you will have until the end of the next week to get as many points as you can.

You earn points for Wins and Draws in live games, and point values are based on the time settings in the game:

You get even more points for playing Arena games. If you are playing in a bullet arena and winning a game gives you 4 arena points, you will get 3 points for winning the game + the 4 points earned for the arena for a total of 7 points.

Note: hyper bullet (30 second or 10 second games) does NOT count for league points. 1|0 is the fastest bullet game that counts.

Direct challenges do NOT count for leagues, only games in the auto-match pool are counted. Games must also be rated to count.

Chess960 counts for leagues, but other variants do NOT.

There are 8 Leagues. Within each league players are grouped into divisions of 50 players that compete to advance to the next League level. Top players in Wood advance to Stone, those in Stone advance to Bronze, and so on.

There are no demotions! Once you get to the next level, you'll stay there even if you take a break from chess for a while.

The week will not begin until there are 50 people in your league group, so some of the higher leagues may take a while to fill. Your games played will not count toward your league score until the ‘week’ has started for that group.

You will know when your group has started and when it will end by looking at your group:

You can find your group by going to your profile page and clicking on the cup in the upper right: 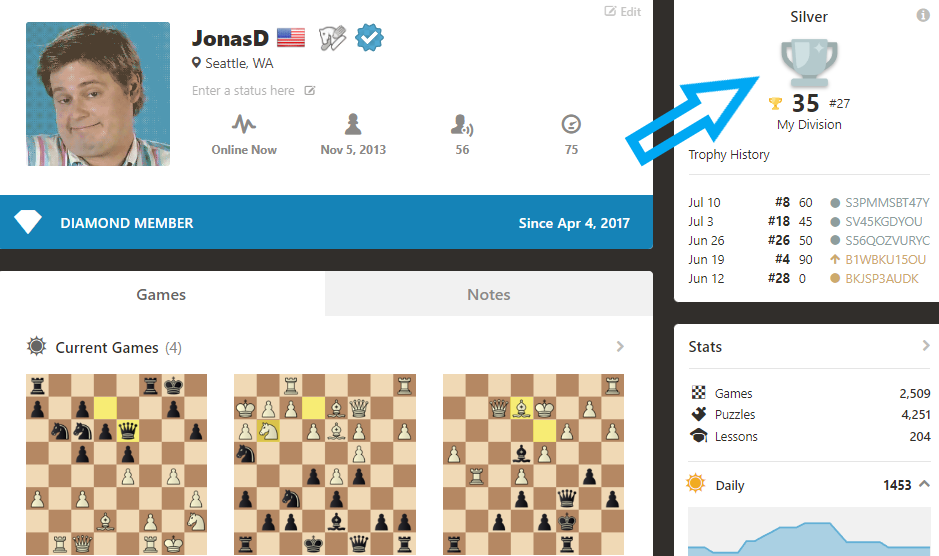 OR, click on the cup on your home page:

You will also see a link to your division after each game you play: 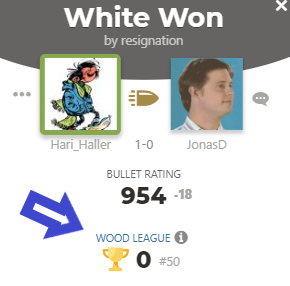 Get as many wins as you can each week, and rise through the ranks!

League trophies should be earned through normal play in chess games, arenas, and tournaments. Any attempt to manipulate your trophies may result in you losing all of your trophies, or having your account closed. This includes but is not limited to:

Collusion with other players

Leagues are intended to be a fun way to compete with players of all ratings. Colluding with other players to intentionally manipulate League results violates the spirit of Leagues. Any users who are found to have colluded will have their accounts closed.

In addition to the items above, standard Chess.com Fair Play Policy applies to all League games.

See here for more info: What counts as cheating on Chess.com?

Can I leave Leagues?

Yes, if for whatever reason you don't want to see your cups earned per game, or take part in the league division, you are always free to leave. Simply go to your division page, then click 'leave league' on the right side of the screen:

Once you have left the players league, you will no longer see your trophies, or your position in your division, or any info about leagues. It will be as if they don't exist for you.

Please note that leaving leagues will remove your current trophies for that week. Even if you leave and rejoin immediately, you will start in a new division with 0 trophies.

If you change your  mind later, you can always rejoin! Simply go to any other players profile page who is in leagues, and look at their division page. Then you can click 'join league' in the upper right:

You will rejoin at the same tier you were in when you left. So if you made it to Stone league when you quit, and you rejoin many months later, you will still be in Stone league.

Did this answer your question? Thanks for the feedback There was a problem submitting your feedback. Please try again later.
Last updated on July 20, 2022