How do Chess.com daily tournaments work?

This will take you to the full list of Daily tournaments!

From here, you'll be able to search for exactly the right Daily tournament for you! 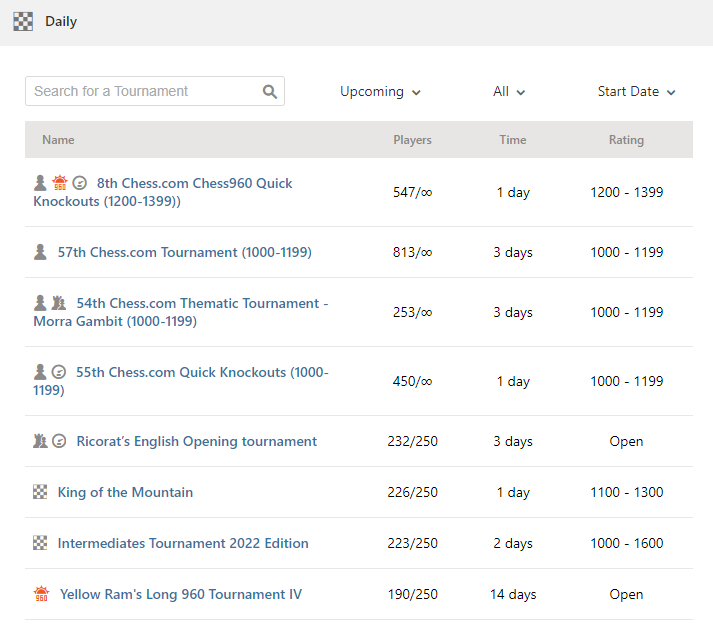 Search for a tournament by name, or use the dropdown filters to get a list of exactly the kind of tournament you want.

-Sort by: when the tournament starts, alphabetical, by how many players have joined, by max players, or by time control (how many days per move)

Check the Legend on the bottom right side of the screen for an explanation of what the icons next to the tournaments mean:

Note: not all of these apply to Daily tournaments 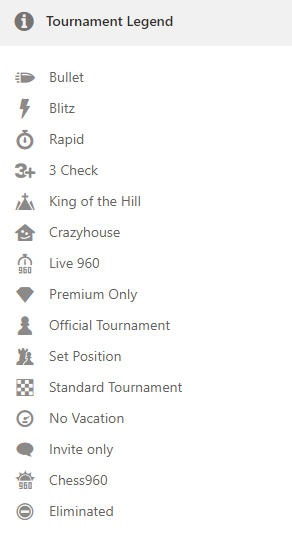 When you find a tournament that looks interesting, click on it! You'll be taken to that tournament's page, where you can see all the details: 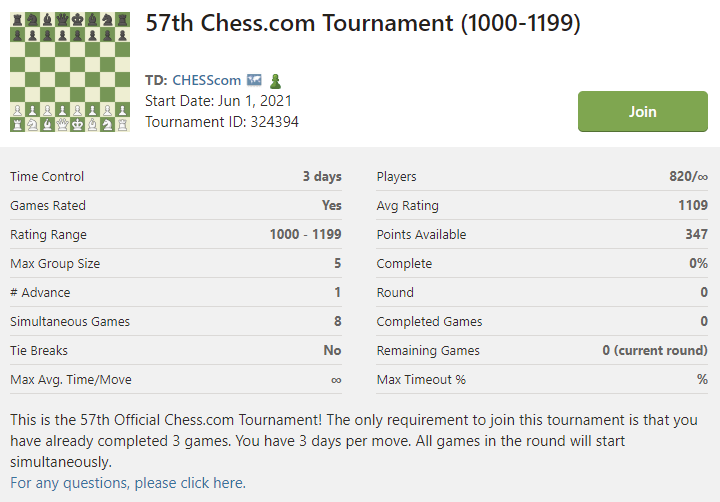 When the tournament starts, your games will start! Chess.com uses the popular Round-Robin format for Daily chess tournaments. In round-robin tournaments each player plays every other player in two games (once as white, once as black). Depending on the settings, these games may happen simultaneously (two games at once per opponent).

See below for an explanation of all the tournament details:

-Time control: this is how much time you will get for each move.

-Games Rated: are the games rated, yes or no(unrated)

-Rating Range: What rating level is allowed to join? Note: you will not see tournaments that are outside your rating range listed in your search results.

-Max group size: How many players will be in your group? This is the number of players you will be facing off against in each round.

-# Advance: How many players will go on to the next round from each group?

-Tie breaks: Will there be tie breaks, or not? If tie breaks are off, then both tied players will advance. Read more about tie breaks here.

-Max avg time per move: Some tournaments require a certain average time per move. You can read more about this here.

-Players: How many players have, and can join? In this example image, 820 have joined, and there is no limit (∞) to how many can join.

-Avg rating: This is the average Daily rating of all the players that have so far joined.

-Points available: This is the total number of tournament leaderboard points that will be given out to those who place in the tournament. Read more about tournament points here.

-Complete: This is the percentage of total games that have so far been completed.

-Round: This shows what round the tournament is on

-Completed games: The number of games completed so far in the tournament

-Remaining games: How many games are left to be played in the current round. When this reaches 0, the next round will start (or the tournament will end)

Did this answer your question? Thanks for the feedback There was a problem submitting your feedback. Please try again later.
Last updated on April 6, 2022